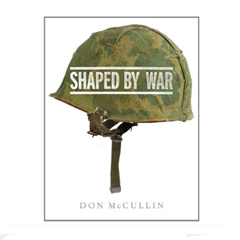 It was the similarity between the derelict buildings that made me think of the analogy first. It is perhaps a little known fact that the sniper scene in the Vietnamese city of Hue in the film Full Metal Jacket was actually shot amidst some crumbling edifices on the Isle of Dogs.[1]


Stanley Kubrick studied photographs taken in Hue in 1968, possibly those made by Don McCullin, and then molded the site to fit the pictures in preparation for his film. The photograph that set Don McCullin on his career path as a war photographer is a portrait of a North London gang posing amidst some bombed out ruins in Finsbury Park. Interestingly, Kubrick started out his career as a photographer for Look Magazine before moving on to film in the early 1950s. McCullin of course rolled into the job of photographing for The Observer in the late 1950s because of the aforementioned picture.

I would like to draw some more parallels here between Kubrick's Full Metal Jacket, and McCullin's work. The poster produced to promote the film shows a soldier's helmet with the text 'Born to Kill' written on it against a white background, whereas the jacket of McCullin's publication Shaped by War shows a similar helmet in an identical position against a blank backdrop with the book's title overlaid on top of the helmet. And of course McCullin's most famous photograph is of a shellshocked US Marine in Hue staring off in the distance whilst clutching his rifle. Whereas in Full Metal Jacket Private (and later Corporal and Marine war correspondent) Joker's exposure to real combat and his shooting of the sniper in Hue leads to his finally acquiring the thousand-yard stare too. Both Kubrick's film as well as McCullin's photographs provide an unflinching and unflattering portrayal of the Vietnam conflict. In a beautifully understated way both show hints of the madness that underlay and was caused by that war.

McCullin's work is en vogue. Some of it was exhibited recently at The Hamilton Gallery in London. It is now on show both at the Imperial War Museum and Tate Britain in London, achieving much press coverage. And there is talk of producing a documentary about his career, to be released in 2012. However, the Shaped by War exhibition currently on at the Imperial War Museum in London, which was previously shown at the Imperial War Museum North in Salford and Victoria Art Gallery in Bath, is a conventional and analytical one. It follows a fairly chronological order, showing the events McCullin covered in correct succession. It details McCullin's life with the help of his passports, his cameras, his army gear. It shows his way of working by using contact sheets with his notes, and shows the results of his work in the original magazine spreads. The framed prints are juxtaposed with wallpapers of his most iconic images. Television screens are at hand to listen to an interview with the photographer himself. In other words, the exhibition charts his career as completely as possible, trying to provide rational explanations of why McCullin became a successful photographer.

The photographs are of course impressive, but what does not quite filter through in the exhibition is McCullin's emotional struggle with his past, with the atrocities he has witnessed, with his guilty feelings about taking pictures of people who are mentally or physically in pain. This comes through much more in the accompanying publication to the exhibition. In the text McCullin reflects eloquently on his life, his choices, his moral stance, and how he has made peace with himself. He indicates how he has kept madness at bay by retiring to Somerset and by focusing on photographing still lifes and landscapes. How he deals with his feelings in a profound but restrained manner in the later stages of his career is what makes McCullin such an interesting character. It is like the detached view of Private Joker throughout Full Metal Jacket, and how at the end of the film he has to deal with the full impact of the war on his emotional state. Just like McCullin does.

[1] The Beckton Gas Works based in Newham, East London